The History of Peanuts

The peanut plant probably originated in Brazil or Peru, although no fossil records exist to prove this. For as long as people have been making pottery in South America (3,500 years or so) they have been making jars shaped like peanuts and decorated with peanuts. Graves of ancient Incas found along the dry western coast of South America often contain jars filled with peanuts and left with the dead to provide food in the afterlife. Tribes in central Brazil also ground peanuts with maize to make an intoxicating beverage for celebrations.

Peanuts were grown as far north as Mexico by the time the Spanish began their exploration of the New World. The explorers took peanuts back to Spain, where they are still grown. From Spain, traders and explorers took peanuts to Africa and Asia. In Africa the plant became common in the western tropical region. The peanut was regarded by many Africans as one of several plants possessing a soul.

When Africans were brought to North America as slaves, peanuts came with them. Slaves planted peanuts throughout the southern United States (the word goober comes from the Congo name for peanuts – nguba). In the 1700’s, peanuts, then called groundnuts or ground peas, were studied by botanists and regarded as an excellent food for pigs. Records show that peanuts were grown commercially in South Carolina around 1800 and used for oil, food and a substitute for cocoa. However, until 1900 peanuts were not extensively grown, partially because they were regarded as food for the poor, and because growing and harvesting were slow and difficult until labor-saving equipment was invented around the turn of the century.

The first notable increase in U.S. peanut consumption came in 1860 with the outbreak of the Civil War. Northern soldiers, as well as Southern, used the peanut as a food. During the last half of the 19th century, peanuts were eaten as a snack, sold freshly roasted by street vendors and at baseball games and circuses. While peanut production rose during this time, peanuts were harvested by hand which left stems and trash in the peanuts. Thus, poor quality and lack of uniformity kept down the demand for peanuts. 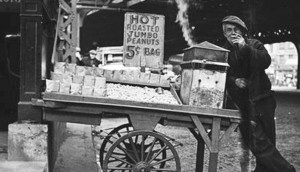 Around 1900, equipment was invented for planting, cultivating, harvesting and picking peanuts from the plants, and for shelling and cleaning the kernels. With these mechanical aids, peanuts rapidly came into demand for oil, roasted and salted nuts, peanut butter and candy. George Washington Carver began his research into peanuts in 1903 at Tuskeegee Institute. Research would lead him to discover improvements in horticulture and the development of more than 300 uses for peanuts (including shoe polish and shaving cream). The talented botanist recognized the value of the peanut as a cash crop and proposed that peanuts be planted as a rotation crop in the Southeast cotton-growing areas where the boll weevil insect threatened the regions’ agricultural base. Farmers listened and the face of southern farming was changed forever. For his work in promoting its cultivation and consumption, Carver is considered the father of the peanut industry.

Soon, mechanized machinery simplified peanut harvesting and processing. Peanut production rose rapidly during and after World Wars I and II as a result of the peanut’s popularity with Allied forces, and as a result of the post-war baby boom. Street vendors began selling roasted peanuts from carts, as did vendors at circuses and baseball stadiums.

Today, peanuts contribute over four billion dollars to the U.S. economy each year. Although the U.S. is a major exporter of edible peanuts to various countries around the world, they are grown in countries as far flung as China, Australia, Argentina and the Continent of Africa.